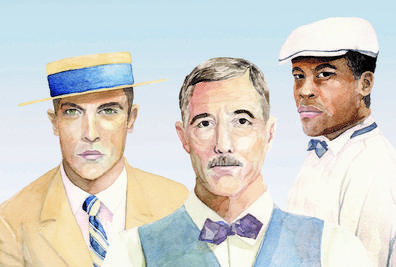 Our collective histories are the DNA of our culture.

Look for the second book in the Delta Series, ​DELTA:  The Women, ​to be published in the summer of 2022.  Follow the research by watching the Selected Bibliography for ​DELTA: The Women as it develops on the "Bibliographies" page.

​​A story of post-WWI Louisiana set in the world of jazz, prohibition, racial injustice, secret societies, and political machines.  While traveling from the bayous of Cajun Country to the streets of New Orleans and the plantations of Mississippi, Cajun journalist Teophile Landry strives to become a voice for justice and compassion in a world of lynchings, package bombs, protests, and conspiracy theories. (Pub. 2015)​

DeVille’s debut novel, the first in a planned series, is an expansive, detailed history of post-World War I Louisiana as told from the perspective of a principled reporter....

Theodore Roosevelt has just died, Helen Keller is a national figure, and Huey P. Long and J. Edgar Hoover are just beginning to rise in their respective professions. Téo takes all of this in while pursuing his new assignment—following Louisiana gubernatorial hopeful John Parker on the campaign trail....

DeVille has researched every last detail of this world to give readers an immersive experience. They are exposed to the music, movies, and technology of the era, and most extensively, the politics of the day. It’s centered in Louisiana but DeVille manages to provide a global perspective....
Often engaging historical fiction that entertains and informs.  -​Kirkus Reviews

Nonfiction account of a family caught in Hurricane Audrey in 1957

​Hurricane Audrey hit the coast of Louisiana in the early morning hours of June 27, 1957.  The storm approached the coast much more quickly and in a different location than had been predicted late the night before.

Thirteen-year-old Terrel DeVille was visiting his sister and her family near Grand Chenier, Louisiana that week.  This is the true story of a family caught unaware in one of the most devastating Gulf Coast hurricanes ever recorded.  (Published 2017)